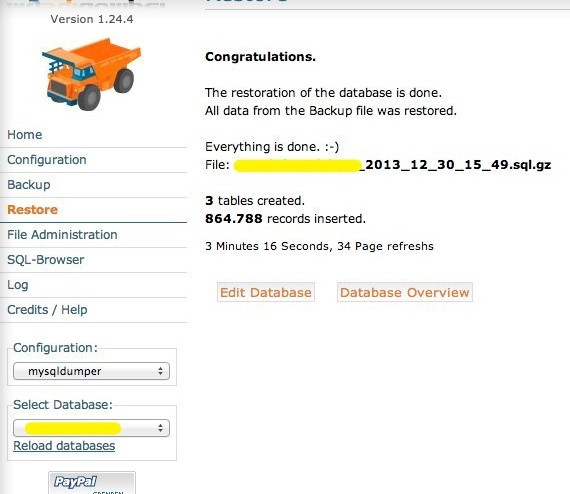 How to transfer the large database file from one server to another server?

MySQL was created by a Swedish company, MySQL AB, founded by David Axmark, Allan Larsson and Michael “Monty” Widenius. The first version of MySQL appeared on 23 May 1995. It was initially created for personal usage from mSQL based on the low-level language ISAM, which the creators considered too slow and inflexible. They created a new SQL interface, while keeping the same API as mSQL. By keeping the API consistent with the mSQL system, many developers were able to use MySQL instead of the (proprietarily licensed) mSQL antecedent.

The MySQL server software itself and the client libraries use dual-licensing distribution. They are offered under GPL version 2,beginning from 28 June 2000 (which in 2009 has been extended with a FLOSS License Exception) or to use a proprietary license.

Support can be obtained from the official manual.Free support additionally is available in different IRC channels and forums. Oracle offers paid support via its MySQL Enterprise products. They differ in the scope of services and in price. Additionally, a number of third party organisations exist to provide support and services, including SkySQL Ab and Percona.

MySQL has received positive reviews, and reviewers noticed it “performs extremely well in the average case.” and that the “developer interfaces are there, and the documentation (not to mention feedback in the real world via Web sites and the like) is very, very good”.It has also been tested to be a “fast, stable and true multi-user, multi-threaded sql database server”.

Issue i have faced while transferring the large database from one server to another server.

I have a trouble with my database transfer from demo server to live server.,it’s having the sql file size of 612 MB. I’ve tried in different ways but i failed to import or transfer database to my live server.

To do this in a best way, i would like to suggest the dumper opensource “Mysqldumper”

which have built with PHP, in a reusable manner. I have used it and saved the bulk amount of time.

So make use of it and you too get succeed.

MySQLDumper is a PHP and Perl based tool for backing up MySQL databases. You can easily dump your data into a backup file and – if needed – restore it. It is especially suited for shared hosting webspaces, where you don’t have shell access. MySQLDumper is an open source project and released under the GNU-license.